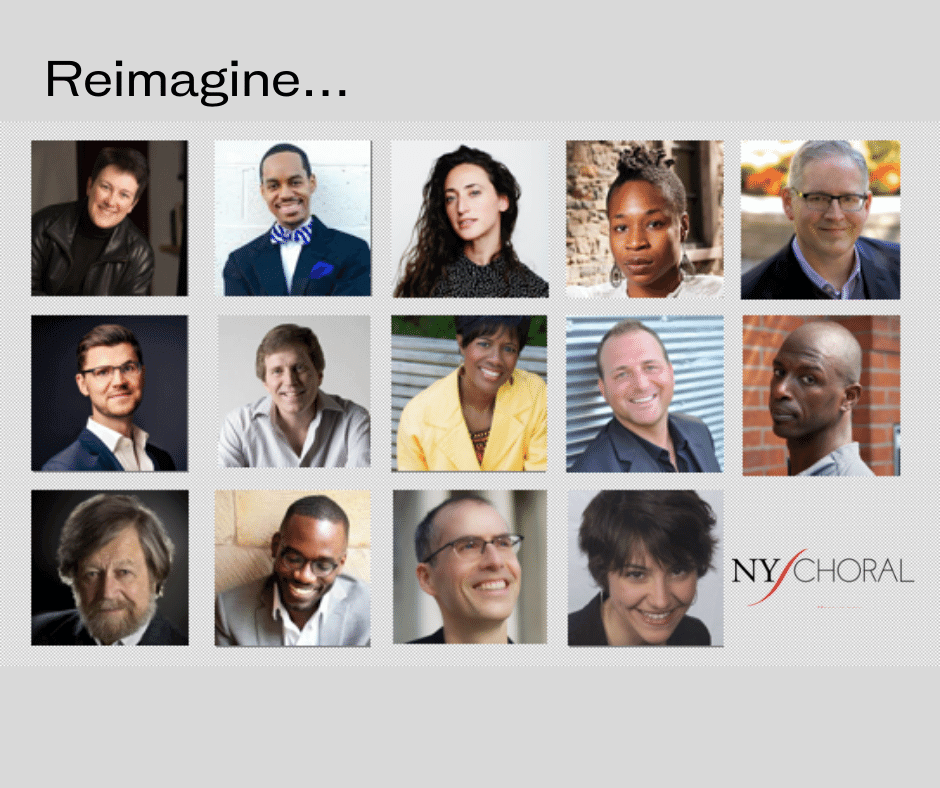 The New York Choral Society, announces Reimagine, a 2021-2022 season unlike any other, producing three multidisciplinary digital performances Earth Song, Morning Light, and The Caged Bird Sings for Freedom, and an anticipated return to in-person performances with Love in Action, and  Ellington’s Sacred Concerts. In a unique and collaborative approach, an exceptional group of all-American composers, choreographers, vocalists, instrumentalists, artists, and activists will come together this season to produce new and inspiring performances that reimagine and celebrate the experience of choral music.

Exploring themes of environmental justice, climate justice, and community empowerment, the season premiere of Earth Song heralds a comforting force and refuge in a multi-disciplinary collaboration with choreographer Danielle Russo and creative technologist Henry Holmes. Premiering on October 13, 2021, Earth Song is an important digital performance of American composer Frank Ticheli’s a cappella choral work to spotlight climate change both locally and globally. The project collaborates with The Danielle Russo Performance Project, a co-operative of movement-based artists who use dance as a form of story-telling and social activism in public spaces, and #Final Notice, an interactive mobile app that seeks to raise awareness of the impact of climate change on residents of the Brooklyn riverfront.

In December 2021, a multidisciplinary digital performance of Morning Light provides a timely meditation on hope that embodies the promise that light will return from the year we have previously experienced. The work, while exploring intersections of movement, text, sound, and song, will feature American composer Kevin Siegfried’s new arrangement for a cappella chorus of the Shaker hymn Morning Light in collaboration with New York choreographer David Hamilton Thomson.

The chorus’ third digital performance The Caged Bird Sings for Freedom premieres on January 17, 2022, featuring Joel Thompson’s choral work inspired from Maya Angelou’s Shaker, Why Don’t You Sing? With imagery of a caged bird used by Angelou repeatedly to illustrate the struggle for freedom by the African American community, the chorus will collaborate with choreographer, performer, educator, and community organizer Marjani Forté-Saunders.

This winter, the chorus will make its long-awaited return to the stage with its first live and in-person performance in nearly two years. Fitting for the month of February, the group will perform Love in Action on February 19, 2022 in a concert of choral music bringing together works of eight contemporary American composers including Marques Garrett, Jennifer Higdon, Rosephanye Powell, Abbie Betinis, Frank Ticheli, Morten Lauridsen, Jacob Narverud, and Jake Runestad to explore universal themes of reflection, action, and love as our city emerges from the devastating impact of the pandemic. Featuring orchestra and four guest vocalists including acclaimed tenor Bernard Holcomb, the 120-member chorus will be joined on stage by several of New York’s first responders and essential workers to offer their thoughts and wishes for a more hopeful, loving, and inclusive future in a concert program that calls our community together in a renewed commitment to hopefulness.

In April 2022, The New York Choral Society will host its annual Spring Gala that will include a celebration of David Hayes’ 10th anniversary season as Music Director.

The season will close on May 6 & 8, 2022 with a performance of Duke Ellington’s Sacred Concerts—a work that hasn’t been performed in a concert setting in New York in more than forty years. Partnering with The New School College of Performing Arts, the organization will perform Ellington’s score alongside The New School Studio Orchestra, a gospel choir, vocal soloists and a visual artist in a program that seeks to bridge audiences across generations and musical interests while celebrating what is thought to be one of Ellington’s most important works. Music Director David Hayes notes: “Although considered by many critics, scholars and musicians to be among Ellington’s most significant works, the Sacred Concerts have yet to reach and inspire a broader audience in the United States.  The Sacred Concerts bring together choral music, jazz, gospel music in a powerful and striking language of vocal and instrumental harmonies.  I am thrilled to bring a long overdue performance of the Sacred Concerts to New York”

“Our 2021-2022 season is an exceptional opportunity for audiences to experience the joy and power of choral music as we reimagine choral performance that is essential, innovative, and inclusive,” adds Executive Director Pat Owens. “We are celebrating American music, bringing visibility to the work of contemporary women and black composers, extraordinary choreographers, vocal soloists, first responders, and more. We are really excited about our season and the opportunity it presents for The New York Choral Society to distinguish itself as New York’s premier symphonic chorus with exceptional artistry, thought-provoking creativity, and grateful service to our city.”